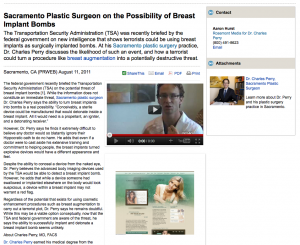 The Transportation Security Administration (TSA) was recently briefed by the federal government on new intelligence that shows terrorists could be using breast implants as surgically implanted bombs. At his Sacramento plastic surgery practice, Dr. Charles Perry discusses the likelihood of such an event, and how a terrorist could turn a procedure like breast augmentation into a potentially destructive threat.

The federal government recently briefed the Transportation Security Administration (TSA) on the potential threat of breast implant bombs. While the information does not constitute an immediate threat, Sacramento plastic surgeon Dr. Charles Perry says the ability to turn breast implants into bombs is a real possibility. “Conceivably, a sterile device could be manufactured that would detonate inside a breast implant. All it would need is a propellant, an igniter, and a detonating receiver.”

However, Dr. Perry says he finds it extremely difficult to believe any doctor would so blatantly ignore their Hippocratic oath to do no harm. He adds that even if a doctor were to cast aside his extensive training and commitment to helping people, the breast implants turned explosive devices would have a different appearance and feel.

Despite the ability to conceal a device from the naked eye, Dr. Perry believes the advanced body imaging devices used by the TSA would be able to detect a breast implant bomb. However, he adds that while a device someone had swallowed or implanted elsewhere on the body would look suspicious, a device within a breast implant may not warrant a red flag.

Regardless of the potential that exists for using cosmetic enhancement procedures such as breast augmentation to carry out a terrorist plot, Dr. Perry says he remains doubtful. While this may be a viable option conceptually, now that the TSA and federal government are aware of the threat, he says the ability to successfully implant and detonate a breast implant bomb seems unlikely.

“I would not change anything! Everyone was extremely professional, caring and helpful through and after my surgery.”
– Facelift Surgery Patient